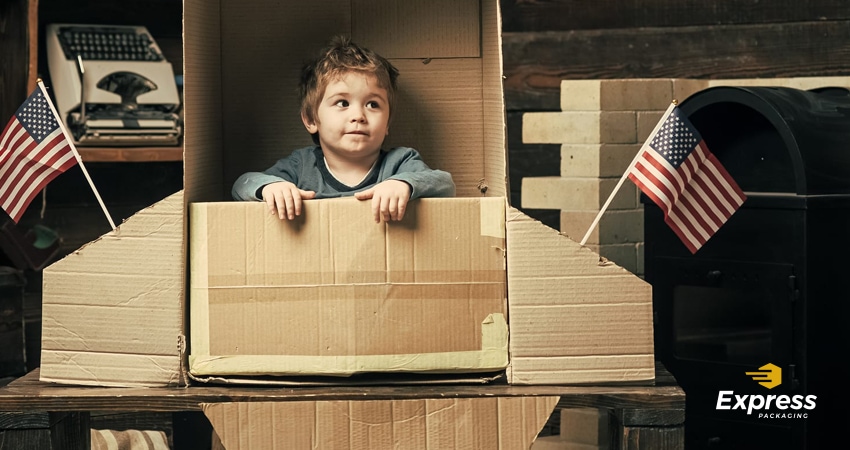 Think cardboard boxes are boring? Well, think again! This seemingly simple storage structure has a long and storied history that has transformed global shipping since it was first invented. Take a look for yourself!

Our story begins as these stories often do, with someone trying to find something to do with the extra material. English industrialist Sir Malcolm Thornhill had a load of single cardboard sheets and suddenly had the idea to make boxes out of them. These new boxes didn’t quite look or feel like the cardboard boxes we know because the corrugated paper hadn’t been invented yet. But they still provided a simple, inexpensive, and effective form of storage. Over the next few years, cardboard boxes became increasingly popular in England.

To learn how cardboard went from an English invention to an international product, you first have to picture a dilemma that shippers faced in the 1840s. Many people in Europe wanted to buy eggs, moths, and other delicate products from Japan. But these items were way too fragile to ship in the wooden crates that were common in that era, especially for such a long journey. Once shippers discovered Thornhill’s boxes, they were quick to start using them.

Cardboard boxes got another boost in the 1850s when the Kellogg Company started using them to package cereal. After this, it didn’t take long for the boxes to become popular all over the globe.

By 1890, cardboard boxes were all the rage, but they still didn’t have the look and feel we love about them. That all changed when Robert Gair, a paper bag producer, and printer based in Brooklyn, invented a new method for making pre-cut boxes from paperboard. He created this method so that he could manufacture boxes more efficiently, but soon realized that it also made it possible to use other kinds of materials. His eye landed on corrugated paper, a material that was currently being used to line hats and wrap shipping materials. Once Gair began making corrugated cardboard boxes, they quickly caught on all over the globe.

Express Packaging has been making the most of corrugated cardboard box technology since we first entered the scene in 1979. For more information on the history of cardboard boxes and safe shipping, take a look at our website today.